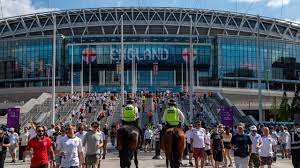 The English national team is set to be banned by UEFA from playing at Wembley following scenes witnessed in their Euro 2020 final against Italy.

Sky sports reports that ticketless fans fought with stewards and police officers and forced their way into the stadium for the game and UEFA disciplinary body will decide on punishment with the decision expected on Monday evening or Tuesday.

According to the reports, as well as the disciplinary investigation into events involving supporters inside and around the stadium, the FA is facing another four charges relating to the behavior of fans.

The charges are disturbances during the national anthems, invasion of the pitch, throwing of objects, and the lighting of a firework.

The ugly scenes at July’s final have raised serious questions about the FA’s ability to host the World Cup in 2030 which it is considering bidding for with the other Home Nations and Ireland.

Wembley’s capacity for the final had been reduced from 90,000 to 60,000 because of Covid restrictions and many ticketless fans were aware there would be 30,000 empty seats in the ground.