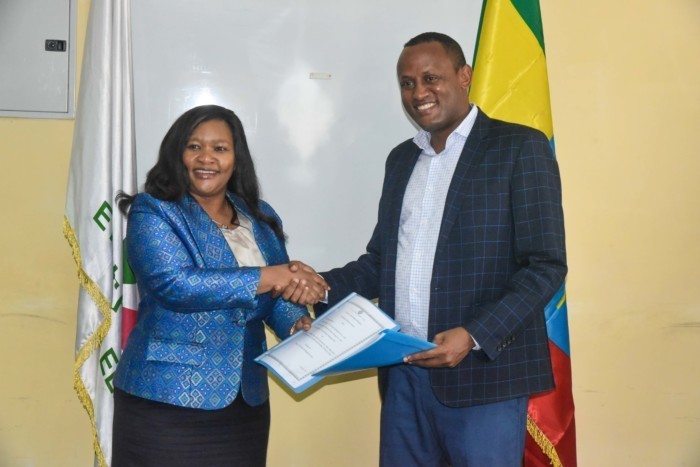 KenGen PLC and its partners from China bid for the Horn of Africa project as a consortium and was awarded the contract in December 2018.

The signing ceremony of the agreement took place over the weekend and was attended by KenGen’s Managing Director and CEO Mrs Rebecca Miano, and other KenGen leaders who witnessed the signing of the deal with Ethiopian Electric Power (EEP) CEO Dr. Abraham Belay.

KenGen’s Managing Director and CEO, Mrs. Miano is upbeat about the award, saying it bolsters the company’s diversification strategy.

“This is indeed an exciting time for KenGen, we are delighted to announce that our diversification strategy is finally paying dividend. This is good news for KenGen, our shareholders and indeed for Kenya as a country,” she said.

Speaking during the signing ceremony, Dr. Belay said Ethiopia had tried to venture into geothermal development in efforts dating as far back as 1981 but was yet to make a commercial breakthrough.

“Currently we have some geothermal drilling rigs that are idle and now broken down and therefore the need to purchase new ones,” said Dr. Belay.

The contract, which is for the implementation of drilling rigs and accessories as well as rig operation and maintenance for drilling geothermal wells at Aluto, Ethiopia is financed by the World Bank through a loan to the Ethiopian Government to the tune of sh 7.6 billion.

The project will be implemented in two phases; phase I which is purchase of drilling rigs and Phase II which entails provision of drilling services.

KenGen is supplying about 30 percent of the component of Phase II which translates to about sh.620 million).