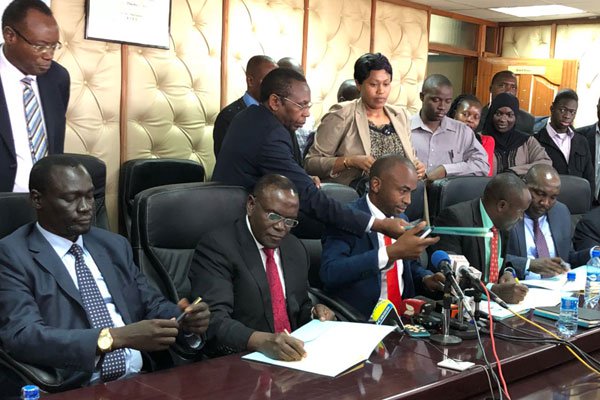 Speaking during the meeting on Thursday ,council of governor chair,  Josephat Nanok said that the truce was reached after diverse consultations between the aggrieved parties in bid to find amicable solution so that the clinical officers can resume their duties.

He urged nurses to emulate clinical officers and doctors return to work formula and resume the negotiations so as to iron out pending issues as per the CBA.

His sentiments were echoed by Health cabinet secretary Dr Cleophas Mailu who urged nurses to follow the suit like their counterparts and iron out issues they are not comfortable with .

He reiterated that county governors are dealing with the strike warning that four counties are severely affected by malaria a situation which has been necessitated by nurses strike.

“Engagements will be of more negotiations ,from council of governors we will encourage more of those negotiations to be able to resolve issues that affect our different personnel so that we can be able to provide the necessary services that the people of this country require .”Nanok said.

Secretary general of clinical officers union George Gibore said that they have decided to give in to the appeal of the Ministry of Health and council of governors so as to allow negotiation to continue to avert further crisis.

He indicated that their main complaint is about job grouping as per the Salaries and Renumeration Commission, lowering ranking their job groups in the workforce.

He appealed to their employers to take into consideration their plight so as to avert further crisis in the health sector, indicating that there is need to have health caucus which keeps on checking emerging issues to avoid deterioration of the sector.

The clinical officers strike which lasted for nearly a month protesting SRC’s recommendation on evaluation cadres.