Over the past few days entertainment news sites in Tanzania have been awash with news of  two bongo hit makers Ali Kiba and Diamond Platnumz renewing their beef and rivalry.

It all started in a song by Fid q , Diamond and Rayvanny where Diamond threw some not so kind words to his opponent with many speculating that it was Ali Kiba who had been on the receiving end of the jabs.

In the track titled fresh, Diamond warned people against comparing him to Cinderella a reference to Ali Kiba’s 2007 hit single Cinderella.

Ali Kiba responded to the Salome hitmaker in a series of tweets.

Diamond later responded to Kiba but this time was said to have dragged his alleged side chic Hamisa mobeto and fellow hitmaker Ommy Dimpoz in the mix.

(One verse is giving them sleepless nights,some ladies are only good at dressing scantily and insulting me on twitter so as to ride on my fame, others have beards joined to their lips and they leave us wondering if they were born that way or they are cursed .They recently posted phones and petroleum jelly ahaa please keep me away from nonsense young girls are not my type)

The jabs about petrolium jelly and phones are said to have reffered to a controversial incident a few weeks ago that angered Tanzanians when dimpoz posted photos of an Iphone together with Vaseline encouraging those who wanted a phone from him to come for it together with the petroleum jelly.

Ommy Dimpoz who rarely ignores his critics was quick to respond to Diamond  but this time dragging Diamond’s baby mama Zari Hassan   in the mix.

Through instagram, Ommy posted a photo of himself and Diamond Platnumz’s mother Sandra Sanura Kassim referring to her as his sister and rebuking Diamond over his alleged lack  of manners which has driven him to  attack his uncle (Ommy) Over siding with Ali Kiba.

Ommy further argues that only the influence of witchcraft can make someone to deny his own blood (Hamisa Mobetto’s son ) to raise another person’s children (Zari Hassan’s kids). 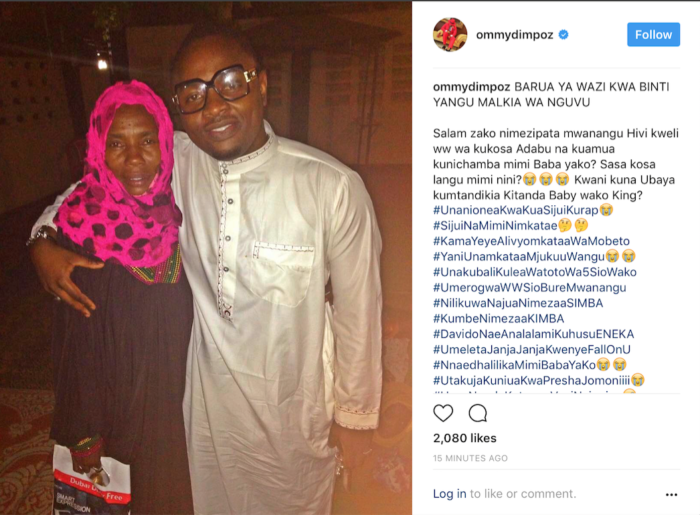 It is well known that Diamond has denied fathering Tanzanian Video vixen and model Hamisa Mobeto’s son who has been named Abdul Naseeb after him.

Neither Diamond nor Zari have responded to Ommy Dimpoz.

It is not clear when the two friends (Ommy and Diamond Platnumz) turned into foes but many trace the genesis of their beef back to 2015  when photos of Ommy Dimpoz and Diamond’s ex Wema Sepetu whom he had broken up with a few months earlier cozying up to each other emerged online.

A few months later Ommy Dimpoz revealed in an interview with Mseto’s Willy M Tuva that Diamond had refused to promote his hit single “Wanjera” which he had featured Wema Sepetu in the video.