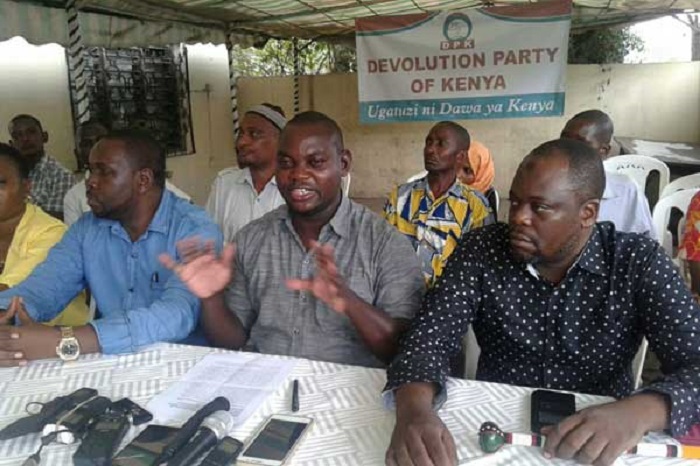 Mombasa,KENYA:Kaloleni Mp Gunga Mwinga has decamped from his former party KADU- Asili to form his own party the  Devolution Party of Kenya.

Addressing a press conference in Mombasa on Wednesday, Gunga  explained that he had decamped from  KADU -Asili after realizing that he had lost control over the party leadership so he decided to form a party that will be championing for the needs of people at the Coast while  ensuring equitable distribution of natural resources .

“It is this need that we have decided to form the party who’s soul mandate is to keep the county and national government on toes to have resources directly transform the lives of all Kenyans at the grassroots.”explained Gunga.

He added that he will defend his seat in Kaloleni constituency  on the Devolution Party of Kenya.

The former Kadu asili party leader also said the party has  already has several  aspirants who are interested in vying on the Devolution Party of Kenya and they were still accepting applications.

The party symbol was a dripping  tap which symbolizes the equal distribution of resources.

Gunga said he was the party chairman and they were slated to launch the party next week after which they would conduct free and fair nominations.

In regards to if the party would field a presidential candidate, Gunga said  the Devolution Party of Kenya would support one of the popular parties in the August polls.

However he did not specify which party they would support.