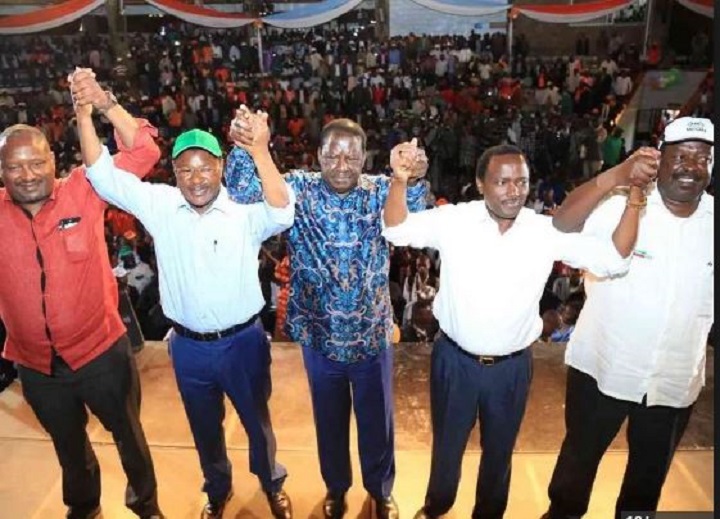 Nairobi, KENYA: Cord allied party leaders have vowed to work together and single out one presidential candidate ahead of August polls.

They urged their supporters to go out and embrace mass voter registration exercise which will kick start as from 16th this month.

They launched onslaught on Jubilee government accusing President Uhuru Kenyatta and his deputy William Ruto for failing to deliver their promises to Kenyans.

“Kenya has been tested to the limit these last four years. It cannot stand another five years of Jubilee.
We have therefore gathered here because our country needs all of us to rise to the challenges that are known to all of us: unprecedented corruption, tribalism that has become official policy, politics that marginalizes communities, all time high unemployment” Odinga said.

Raila warned Jubilee administration not to engage in any electoral malpractices in the upcoming general elections.

Mombasa governor Ali Hassan Joho blasted the Jubilee administration for failing to initiate projects in the coastal town of Mombasa since it clinched to power.

Wiper party leader Kalonzo Musyoka and Ford Kenya leader Moses Wetangula slammed the government for passing election laws which allows manual back up system; vowing to go back to the streets to air their grievances concerning the legislation of that law which they termed as retrogressive.

Wetangula said that opposition will embark on mass action immediately after the completion of voter registration exercise .