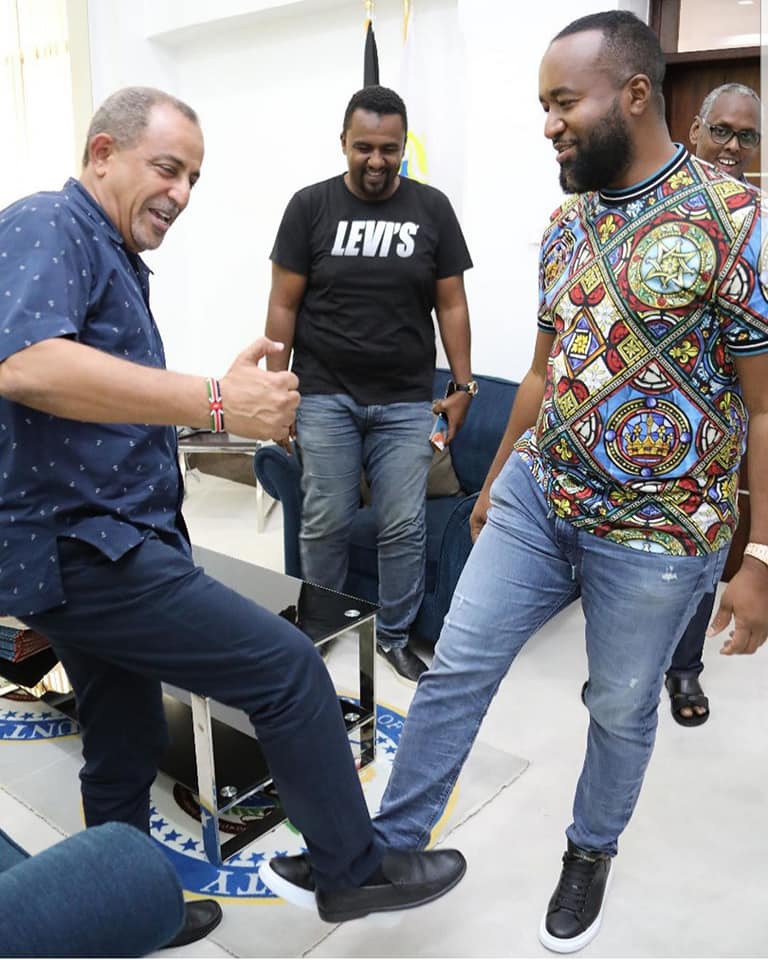 In last general election Joho differed several occasions which the president Uhuru Kenyatta which led him to be blocked to attend presidential functions in Mombasa.

But what was seen a daring move by Joho, things turned around for him following the handshake between Kenyatta and his ODM party leader Raila Odinga. Joho’s political stature grew tenfold.

Odinga is Joho’s political father and the Mombasa Governor has never failed to let his political friends and foes know.

He was once quoted saying he follows Oding’as orders firmly. “When baba says jump, i dont ask why, but i ask how high” he said.

Joho made a u-turn following the handshake and even publicly shook hands with Uhuru. He has since then, been a fierce supporter of president and government projects.

This is a clear example, that politics is a dirty game

As we near 2022, governor Joho will not vie again for the gubernatorial seat in Mombasa since he is serving his last term as the County boss.

A question many have asked, who will replace Joho?, with his huge followers in Mombasa Joho will definetly determine who will be the next Mombasa Governor .

During the BBI meeting in Mombasa, wiper party leader Kalonzo Musyoka attended the rally and asked Joho to hold Kisauni MP Ali Mbogo’s hand in 2022 for the top County seat.But in response, Joho sarcastically said whoever will be contesting for the Mombasa gubernatorial seat will be lucky since he will not be seeking for the re-election and wished all best of luck.

Joho emerged winner with a lot of votes cementing the view that he is the ODM kingpin in Mombasa and coast region.

After Raila Odinga handshake with President Uhuru Kenyatta, Joho also had a handshake moment with Shahbal-his political nemesis- where it is said they agreed to bury their political differences and work together. This move has not escapaed the eyes of the political class. Could Joho and Shahbal be testing waters for 2022?. This sent political shockwaves in the and forced realignments for those eyeing the Mombasa gubernatorial seat.

When launching emergency respond to avert coronavirus epidemic, Joho and Shahbal greeted each other with their legs.The photo went viral. But for political analysts, the two are at ease with each other and enjoyed each others company, a move construed will have a bearing in 2022.

Sarai and Nyali MP Mohamed Ali alias jichopevu also visited Deputy President William Ruto at his Harambee office in Nairobi. This move also raised eyebrows in the political scene. What are they planning?, is it a 2022 strategy for the coveted seat?.

“Are these silent campaigns to get backing for Mombasa Governor’s post”? What could the trio be signaling by meeting the two de facto leaders- Odinga and Ruto?

Ali was elected on an Independent ticket and has remained very close to Ruto.He does not see eye to eye with Joho.He claimed Joho tried to rig him out of Nyali Mp seat in favour of his brother popularly known as Saido.

Sarai in a repeat election in 2017, led his team to vote for Jubilee in Mombasa and he has continually supported Ruto.He may be Ruto’s hand in Mombasa 2022 gubernatorial seat.

Mvita MP Abdilswamad Nassir has also remained relentless in Coastal politics; an ally has revealed that he will be contesting for the Mombasa gubernatorial seat in 2022.According to political opinions, he has a great chance of succeeding Joho. His gentleman-like politics of not roughing shoulders with his nemesis may endear him to the people.

He has remained close to the Mombasa governor Ali Hassan Joho.

During SGR anti demonstrations held in Mombasa early this year, Abdulswamad participated in procession but did not reach the governor’s office. Political analysts term the move as calculated so as not to seem to be seen opposing Joho and bringing bad blood between them.

The last person whom has also been named and may be seeking the Mombasa gubernatorial seat is the Mombasa County speaker Harub Khatri.

Although he has not contested any political seat, Joho fished him from selling vehicles in Mombasa CBD and thrust him into county politics. As a political novice, his chances of being a force to reckon with in 2022 are slim. He is hardly known outside the County Assembly.

However, things could change for the better for him , if Joho who enjoys a near fanatical following in Mombasa, settles his eyes on him to succeed him.

Joho’s deputy William Kingi who was “plucked” from academia in 2017, has not shown any interest in the seat. The career academician’s chances seem slim too. He is mostly in his office and rarely engages the people in the grassroots.

One thing is certain, as at now,  nobody knows who will succeed Joho in 2022.The Governor is playing his cards close to his chest by keeping people guessing his next move.