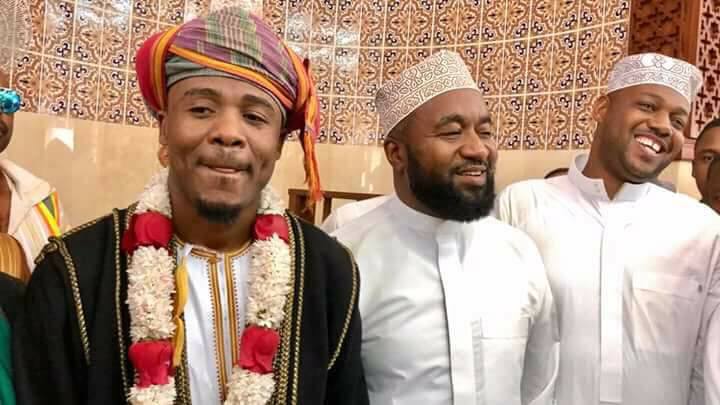 Sensational bongo musician Ali Saleh Kiba aka Ali Kiba is in the country to finally tie the knot with his Mombasa girlfriend Amina Khelef.

The singer finally “said I do” at the Masjid Ummu-Kulthum mosque in Kizingo.

The wedding which was not to have any children seemed like a huge success for the first step in an Islam wedding, Nikah, which was attended by 001 governor Ali Hassan Joho and President Jakaya Kikwete also present was his best friend, Ommy Dimpoz.

The wedding celebration took take place inside governor Joho’s residence and was attended by Ali Kiba’s side family including his mother Zabibu and brother Abdu.

The seduce me hitmaker is expected to have another grand ceremony in Dar es Salaam on Thursday next week.The two lovebirds have defiled all odds by managing to keep their relationship off the public limelight.

Kiba a father of three was not successful in his former relationships with his Tanzanian babes.

During an interview with Chill Na Sky in Tanzania, Alikiba revealed the main reason he has never married any of his kid’s mothers.

(“I wanted to stay with all of the three women but things changed as time went by. Sometimes you fight with one, next you fight with another then they all move on with other people, that for me cannot work.”

Wishing Mr. and Mrs. Kiba all the best in their nuptial