Last year Diamond’s official DJ and the Vice president of WCB Romy Jons said that women would be the downfall of wasafi records and his words might be true.

The latest member to join the group of wasafi artistes who have had women fighting over him is non other than Harmonize.

This was after his Italian girlfriend Sarah locked horns with his exgirfriend Tanzanian actress Jacqueline Wolper stylish.

Well Harmonize and Wolper dated sometimes in 2016 and broke up in the beginning of 2017 after Wolper began  alleging that Harmonize was cheating on her with Sarah who had bought him a phone and a golden ring.

Last week , Harmonize , his mother and Sarah visited Serengeti national park and all was well till Harmonize posted a photo of his mother and requested his fans to leave a message for their mother’s of which Wolper commented ‘Mama’with a love emoji .

This infuriated Sarah who warned Wolper to stop commenting on Harmonize’s photo.

“stop comment in page of my boyfriend like a stupid😂😂😂and u call her mum for wich reason ???😂😂 live him alone 👋” Sarah warned Wolper.

Sarah must have used the post to investigate how many women were calling Harmonize’s mother mum as she also questioned and threw a jab at Nigerian songstress Emma Nyra who commented with the word mum followed by a heart emoji on the photo.

However Wolper’s fans were quick to attack Sarah over throwing jabs at Wolper and Sarah decided to provide evidence proving Wolper was still communicating with her man .

Sarah shared a screenshot of Wolper sending a DM to her man of a video of them together saying she was hurting over the video and was blocking anyone who was tagging her in the video. 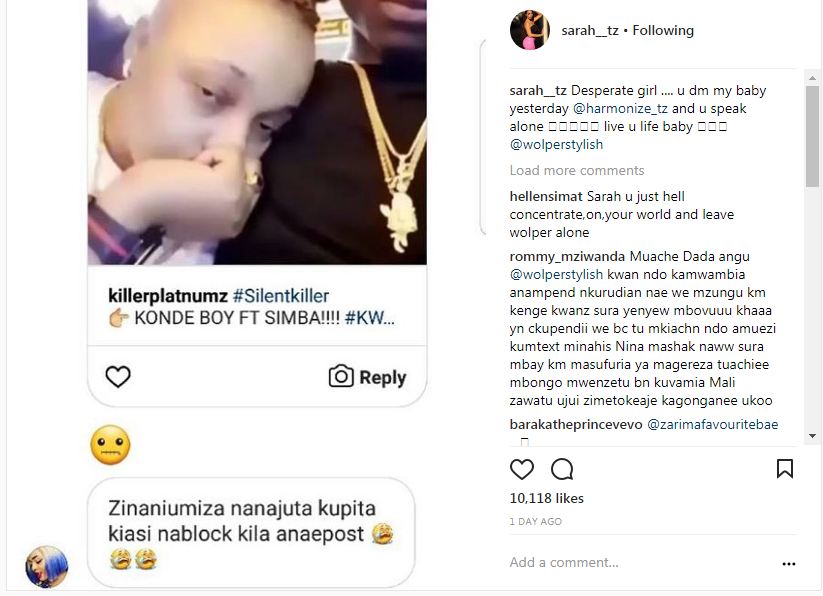 This is not the first time that Wolper and Sarah are exchanging jabs over Harmonize, last year the Tanzanian actress threatened to take back Harmonize from Sarah if she did not stop insulting her on social media.

Harmonize himself has steered clear of the drama between Wolper and Sarah.