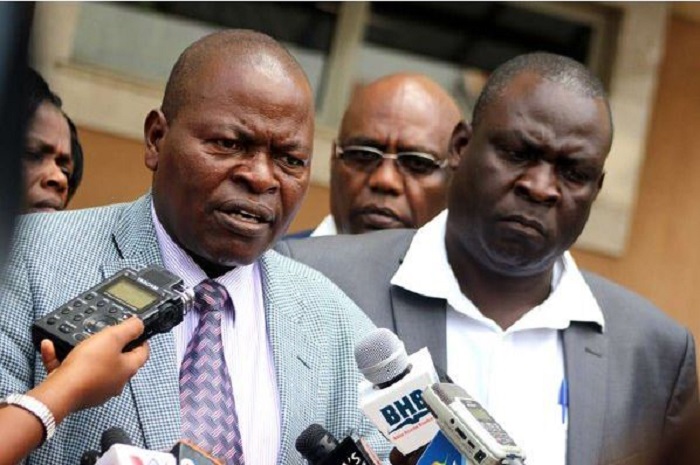 Nairobi, KENYA:Kenya Union of Post Primary Teachers (KUPPET) has condemned the recent killing of teachers by Al Shabaab militants in North Eastern Kenya and have called on the government to withdraw all teachers working in the area till their safety is guaranteed.

The teachers’ unions also noted that the wanton murder of teachers and destruction of school properties in the region is a clear indication that there is an urgent need for reforms in the management of teachers in that areas.

Addressing the media in Nairobi on Sunday, KUPPET Secretary General Akelo Misori called on the Teachers Service Commission (TSC) to withdraw teachers from North Eastern until the region is safe and conducive for teaching and also learning for students.

Misori directed the TSC and the Interior Ministry to beef up security in the region failure to which the union will instruct all their members who are non-residents of North Eastern region to withdraw their services.

“The Ministry of Interior must ensure it provides adequate security to teachers and students in the North Eastern region failure to which, then we will order all affected members to leave their stations immediately” Misori directed.

In a statement, Kenya National Union of Teachers KNUT Secretary General Wilson Sossion said non-local teachers in Wajir, Garissa and Mandera, including Lamu and Tana River, have become a soft target for terrorists, hence their call on Government to establish a special unit of police to guard teachers and learners as it is happening with diplomats, tourists and VIPs.

Misori further directed the government to compensate the affected teachers and their families to enable them to cater for the expenses incurred after the attacks.

He urged the Interior Ministry to come out and offer an in-depth explanation to the public on the issue of the recent attacks on teachers adding that the Ministry must provide elaborate and sustainable security measures for all schools in the Northern Kenya regions.

“It is a very sad affair that teachers are being butchered in North Eastern parts of Kenya. The government must come up with more sustainable security measures for our schools, particularly in Northern Kenya. It should also compensate the affected teachers and their families”, he noted.

He pointed out that the newly appointed Cabinet Secretary of Education Amina Mohammed should put more emphasis on the welfare of teachers and students in Northern Kenya by collaborating with the Interior Ministry to provide more security to the affected areas.

At the same time, Sossion pointed out that TSC should not purport to be condemning the killings and urging teachers not to flee because this is not the first time teachers and their families are being killed and school property being destroyed.

The two unions also accused TSC and the Ministry of Interior of ignoring the security of teachers in Northern parts of Kenya by being silent over the matter noting that the government has not offered any valid explanation on the issue of the teachers’ attacks.

Their remarks come after two teachers and a spouse to one of the teachers were killed in a dawn attack by suspected al Shabaab militants at Qarsa Primary School in Wajir County last Friday while another teacher sustained injuries.