The self-proclaimed National Resistance Movement (NRM) “general” was put into a KLM flight that was departing Nairobi for Canada some few minutes after 10pm.

“We are reliably informed that Miguna Miguna has been forced into a KLM flight for “deportation” to Canada. Now, how do you deport a Kenyan? This Country has been overrun by criminals.” tweeted Nelson havi

Reports indicate that Instead of him being taken to court as ordered repeatedly by the courts, Miguna passports were seized and he was driven to the runaway at the JKIA at around 6pm.

Photos of Miguna Miguna inside the KLM plane have been circulating on social media ever since the news broke on last evening. 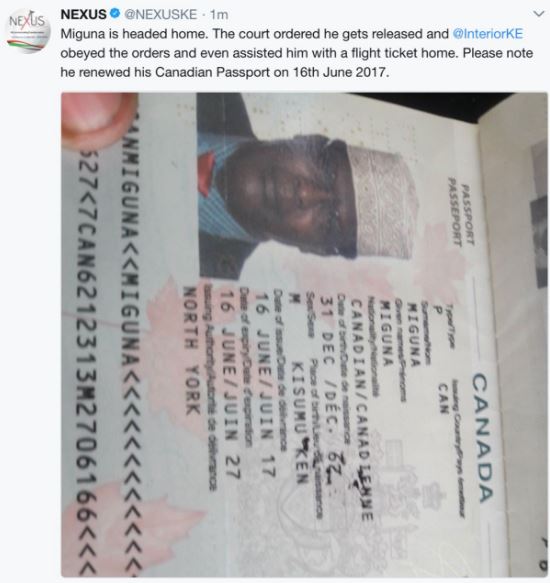 Earlier on Tuesday, Miguna was charged in Kajiado and taken to Nairobi but nobody got to see him.

Reports of his deportation come hours after High Court Judge Luka Kimaru barred the Director of Criminal Investigations (DCI) and the Inspector General (IG) of the police from preferring any criminal charges against him.

It is not clear what law the government used to eject him from Kenya at the moment.

Kenyans on Twitter have expressed their concern regarding the deportation of Miguna, most of them not understanding what law was used to eject him.

The Interior Ministry through its spokesman Mwenda Njoka, said that Miguna Miguna denounced his Kenyan citizenship years back and never bothered to reclaim it.