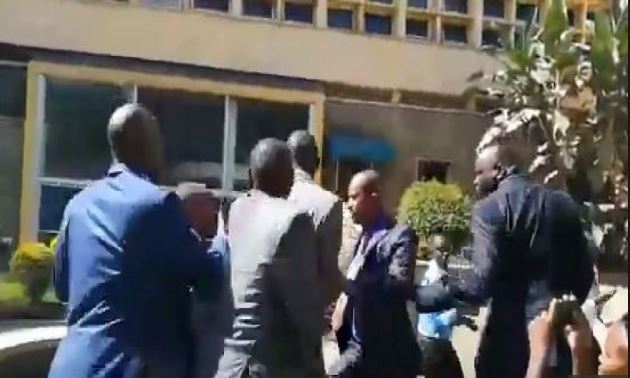 Nairobi, KENYA: Members of Parliament Charles Njagua and Babu Owino on Tuesday exchanged blows at parliamentary buildings over a  disagreement.

It is alleged that Babu said that Jubilee regime wont last for long, statements which angered Njagua who resorted to exchange of blows.

The two MPs fought before they were separated by Parliament staff and their counterparts.

In the video, Jaguar can be heard shouting at Babu Owino before the Embakasi MP charged towards the singer now turned legislator.

The two then took their fight into the media centre where someone was heard telling Babu “Lazima uheshimu president” (you must respect the president) to which Owino replies (huyo ni caretaker president).

Jaguar then replies, “Tutakushika tu Babu, usiende kwa choo” (We will get you Babu, don’t hide in the toilet).

The two MPs will appear before the Powers and Privileges Committee, where they risk being suspended from parliament.