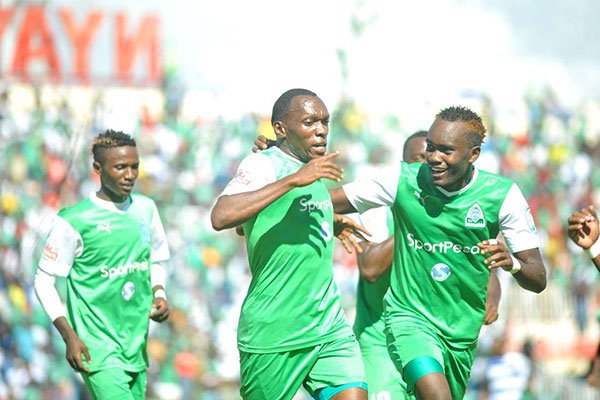 The win saw K’ogalo take their point tally to 34, one better than second placed Posta Rangers who downed the reigning champions Tusker 1-0 in the 18 rounds of the matches.

Elsewhere, Ulinzi Stars remain third in the standings on 29 points despite losing 1-0 away at Nzoia Sugar as AFC Leopards failed to coast past Western Stima for the second time in a span of four days, drawing 1-1.

At Kericho, Zoo FC stunned season’s impressive side Kariobangi Sharks in a five goal thriller while struggling Mathare United revived their survival hopes with a 1-0 success over the visiting Kakamega Homeboyz.

In Mombasa host Bandari FC rued missed chances as they were forced to settle for a barren draw by Sony Sugar, barely days after beating the latter one nil in its home turf.

With the results Bandari under the custodian of last season’s title winning coach Paul Nkata stagnates seventh having amassed 26 points while the Millers occupy position 14 with eight points less of the former.