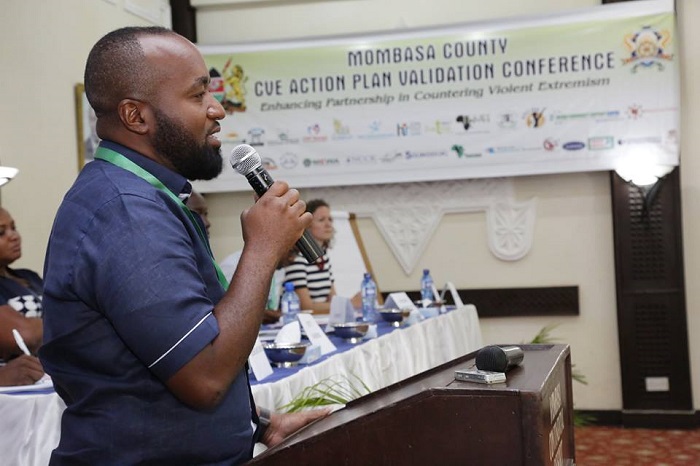 The plan provides guidelines and policy for all stakeholders, will rally all governments {County and National}, communities, civil society, the private sector and international partners in the war against terror.

Speaking during the CVE plan validation conference in Continental hotel in Mombasa, HAKI Africa executive director Hussein Khalid said the plan will  enhance partnership in countering violence and extremism in the county.

Hussein added that the plan is an outcome of several months of consultation with stakeholders.

“This will guide us in the war against extremism in the county, and it stipulates what need to be done by different stake holders in the fight”, said Khalid.

Mombasa county governor Hassan Ali Joho who was among the guest, challenged the stakeholders to some up with modern ways of tackling the issue, as dynamics changes, like counter narratives.

However, he acknowledged the efforts so far made by the stakeholders.

“The dynamics keep changing. You cannot say you have completed a policy that can work with all generations. But so far there is tremendous progress but there is a lot of work to be done,” said Joho.

Mombasa senator Hassan Omar Sarai, applauded the efforts but challenged the governments both county and national, to add more resources in the CVE.

“The government must continue involving everybody like what they are doing now, like the community, the civil societies, religious leaders in this fight” said Sarai.

Civil societies in the plan, include Haki Africa, Action AID, Solwodi, among others.Several counties are expected to develop their CVE- action plan  after the launch of the national plan which was launched by president Uhuru Kenyatta is 2016.