Nairobi,KENYA:Barack Obama’s half brother Malik Obama has sparked debate about the former US president’s birthplace citing what he says is evidence that Obama was born in Kenya.

According to the birth certificate that Malik Obama posted on his twitter account, Obama was born at Coast General Hospital in Mombasa popularly known as Makadara in 1961.

However, Obama has been denying allegations that he was born in Kenya.

He would be ineligible to run for president of the United States in 2008 had it been proven he was not born in the country.

Malik Obama says although he loves his brother, he claims that he is a liar and that he refused to identify himself with his African roots.He further alleges that Obama isolated his Kenyan family after he won the US presidency in 2008.

Malik Obama is a supporter of the current US president Donald Trump, who sparked a debate in 2008 when he claimed the former president was not born in the United States. 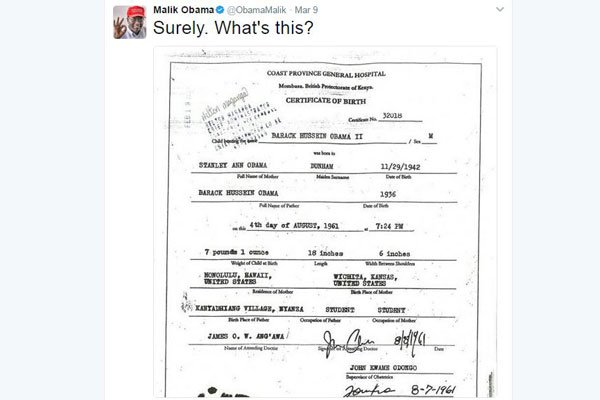