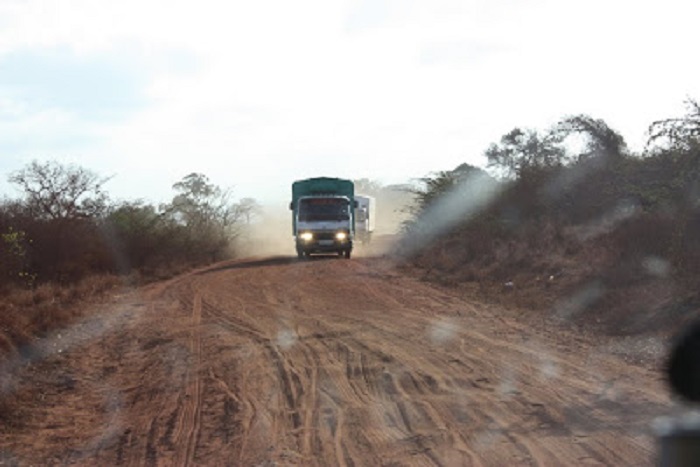 Kilifi, KENYA: Residents of Jaribuni in Ganze Sub-county took to the streets to protest against dust brought about by lorries ferrying minerals from the area.

The residents blocked more than two hundred lorries from accessing the mines and quarries in the wee hours of Thursday morning.

They put barriers using logs and stones on the main Mbudzi –Jaribuni and the Majajani-Barrier roads.

They said the dust is so much that is posing a great danger to their health and has also led to closure of various food businesses.

Chairman of the Barrier Anti-Dust forum Philip Munga told Baraka FM that efforts to find a solution  through the relevant authorities and area leaders had proved futile.

“Investors are neglecting the health of the community by exposing them to too much dust which they are not taking control of, especially from the lorries which operate for 24 hours,” said Munga.

“We will not to allow any lorry to ferry any minerals until the road is tarmacked. All stakeholders and leaders were invited to the anti-dust forum so that we can find a lasting solution but people are still suffering,” Munga added.

He said no leader has been able to come forth to address the issue, despite having been resolved in the forum earlier on that there must be water boozers to sprinkle water on the roads as temporary measures, but nothing has materialized so far.

Hamisi Mwarabu, a resident from Mbudzi, accused leaders from both the national and county government and also investors for failing to take the environmental pollution caused by the dust with the seriousness it deserves.

“The road is used by investors and the community is only benefiting with dust. We cannot wash our cloths during the day, instead we do that at night so as to avoid dust,” said Mwarabu.

Mary Pole a mother of six expressed her embarrassment after her children were forced to vacate their rooms and seek accommodation at their grandmother’s house.

She said the family members are coughing and sneezing profusely and are all under medication.

“It was hard for my children to sleep in their rooms because the dust became too much for them. The room is congested, during the night they cough and sneeze throughout,” Mary said.

However, Ganze MP Peter Shehe said that it is  the responsibility of the County Government to improve the road conditions since they are the beneficiaries of the revenue collected.

Shehe who is a member of the Parliamentary Committee for Roads, said the road which is under the Kenya National Highway Authority (KNHA) was not meant for heavy commercial use.

“The road is being overused by lorries loaded with over hundred tons of quarry material. More than two hundred Lorries use the road daily and the road was supposed to be used by light commercial vehicles,” said Shehe.

In response, Kilifi County Chief Officer in charge of roads and public works Ken Kazungu said the road is not under the County government.

He said it can take responsibility of it if the National government allows them to do so.

“We have experienced issues when we undertake projects which are not under the mandate of the County government, and the same will happen to the road if we dare touch it. The MP should consult with the KNHA and have the roads allocated under our care,” said Kazungu.