Nairobi Senator’s daughter Saumu Mbuvi  has revealed why she broke up with her boyfriend who happens to be an aspiring politician.

Saumu who is  expectant in an Instagram post last week, where she also threatened to sue bloggers defaming her name, said that infidelity was the cause of  her breakup with Benson Gatu.

“I’m tired of waking up every morning getting different stories about me on these cheap blogs.Just to clear the air,I was never married in the first place.I am just a woman who realized her worth it was too late,yes we broke up. I am just too young to go through such bull**t of a man moving from one politician’s daughter to another for his selfish benefits,” she wrote. 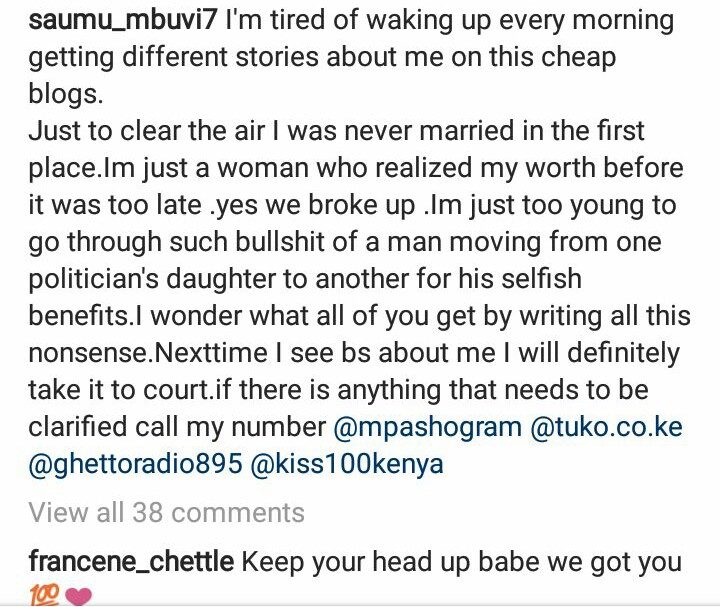 Saumu further accused her estranged ex-boyfriend  who is said to be eyeing  a parliamentary seat in Murang’a county, of moving around with other politicians daughters for his own selfish interests.

The allegations comes just a few months after the Nairobi Senator allegedly disapproved of the relationship  accusing Gatu of joyriding on the families political influence, in a bid to gain political mileage .

Following the breakup, reports state that Saumu went to back to her parents home in Runda and she has had two baby showers and Gatu has attended none of them.