According to a post made by the Kenya Film and Classification Boss Ezekiel Mutua, the comedian called Mutua and took full responsibility further requesting Mutua to pull down an earlier post he had posted criticizing the content aired on the show terming it as unfriendly  for family viewing.

“I have received a call from Mwalimu King’ang’i this morning regarding the unfortunate episode of the Churchill Show last night. He has apologised and taken full responsibility and requested that I pull down my post. I do so in good faith and in reciprocity for the mature manner in which he has handled the matter. I do so because I believe people make mistakes and learn from them. We all know the contribution of Mwalimu King’ang’i in developing talent in Kenya. We salute him for his outstanding contribution and hope that he will use last night’s blunder to rebrand and make Churchill Show the family program it’s supposed to be. All programs airing between 5am and 10pm should be suitable for family viewing. Churchill Show is not any other program. This has been the top stand-up comedy show in the region for years. It’s a family show that builds talent and brings laughter to our sitting rooms. To allow the pathetic adult jokes that have come to characterise it lately is unfortunate. While at a personal level I accept the apology the Board will pursue this matter to ensure the mistake is not repeated and will mete the necessary sanctions on the Show. Our message to you Churchill is simple: You are talented. You are a mentor to many. Mungu amekutoa mbali. Please don’t use your talent to corrupt the moral values of our children. Give us clean content. YOU DON’T HAVE TO BE OBSCENE TO BE POPULAR! 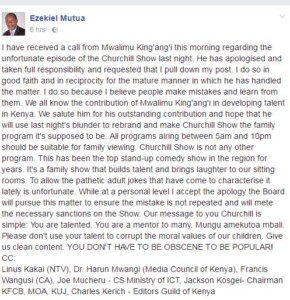 The popular show which airs on Sunday evening  was pulled down after airing for 25 minutes, after some of the acts became x-rated.

A documentary was aired for the remaining minutes as Mutua took to social media to register his disgust.

“A stupid, horrible prank on Churchill Show. An unfortunate idiotic and foul drill, totally in bad taste, lacking in imagination and possibly the evidence of the beginning of the end of an era. That prank, plus the meru-accent-laden village wag’s ‘dirty’ talk disguised as bicycle ride is against the Programming Code for Free-to-air radio and television services in Kenya.”read part of Mutua’s post.

Mutua says he has accepted Churchill’s apology but warned  him to desist from using his talent to corrupt the minds of Kenyan children.