Melania arrived at Nairobi National Park on Friday to learn about steps Kenya is taking to conserve elephants and rhinos.

Prior to her Nairobi National Park safari, the First Lady of The United States (FLOTUS) visited the David Sheldrick Wildlife Trust in Nairobi where she even fed baby elephants some bottled milk.

This even after Trump’s administration, in March this year, lifted a ban on importing remains of elephants killed in Zimbabwe and Zambia, causing an uproar from wildlife conservationists worldwide.

“Legal, well-regulated sport hunting as part of a sound management program can benefit certain species by providing incentives to local communities to conserve those species and by putting much-needed revenue back into conservation,” a U.S. Fish and Wildlife Service spokesperson told Slate.

“The U.S. Fish and Wildlife Service has determined that the hunting and management programs for African elephants in Zimbabwe and Zambia will enhance the survival of the species in the wild,” he added.

FWS had in November 2017, announced it would lift a ban on elephants imported from Zimbabwe and Zambia, maintaining wealthy hunters would help raise money for conservation efforts, but through a tweet, President Trump said “Put big game trophy decision on hold until such time as I review all conservation facts. Understudy for years. Will update soon with Secretary Zinke. Thank you!”

Even referring to it as a “horror show”.

But in a letter dated 1st March, Interior Secretary Ryan Zinke announced the importing of elephant trophies would now be approved on a ‘case-by-case basis’.

The ban was first implemented by former US president Barrack Obama’s administration in 2014.

A photo of Donald Trump Junior holding a knife and a severed tail of an elephant he reportedly killed in Zimbabwe in 2011 sparked outrage among animal rights activists. 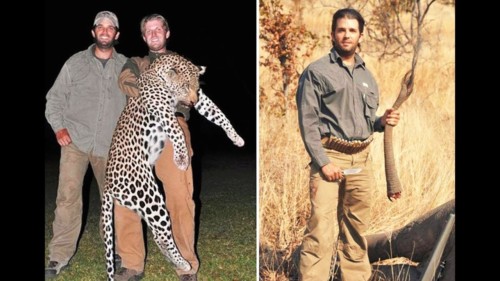 “If you wait through long, cold hours in the November woods with a bow in your hands hoping a buck will show or if you spend days walking in the African bush trailing Cape buffalo while listening to lions roar, you’re sure to learn hunting isn’t about killing. Nature actually humbles you,” he said.

“The world’s largest land mammal, the African elephant has been classified as threatened under the US Endangered Species Act since 1979. A licensed two-week African elephant hunt can cost more than $50,000 per person, not including airfare, according to advertised rates,” a paragraph on the UK news site Independent reads.

Kenya was among the first countries to sign the Avaaz run petition, a petition compelling the European Union (EU) to ban Ivory trade, just two weeks after the US lifted the ban on trophy hunting.

The petition was signed by the Cabinet Secretary for Environment and Forestry Keriako Tobiko on behalf of President Uhuru Kenyatta, in a ceremony held in Kasane, Botswana (which has the highest elephant population in the Africa).