The past week has seen bongo Hitmaker Diamond Platnumz rub a section of his female fans the wrong way.

It all started when he called one of his sons, Dylan Platnumz, whom he sired with Tanzanian Model and socialite Hamisa Mobetto, a sidekid during a media interview.

However, this is not the first time the singer, whose life is characterized by a string of lovers and an overprotective mother, has angered women.

Here are 4 incidents where the self proclaimed ‘lion’ has made disparaging remarks against his exes.

1. Chimpanzee – Not long after a section of Hamisa Mobetto’s fans attacked Diamond Platnumz over calling her son a sidekid, Diamond referred to one of his exes as a Chimpanzee! It all started when one of Platnumz exes, Wema Sepetu, who has been blamed over his breakup with Ugandan socialite Zari Hassan, posted a photo hanging out with the bongo artiste.

A fan commended the bongo star over not fondling  Wema in the photo, to which he responded that fondling women was part of his job which he was not just about to stop because one Kima which loosely translates to a  chimpanzee had spoken. 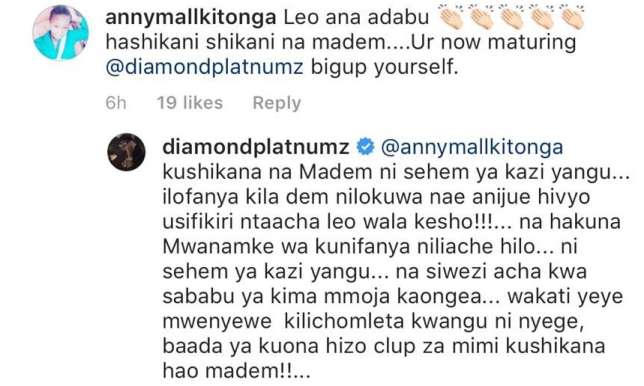 It is not yet clear which of his exes he was directing the jab to. However, a few days before a Tanzanian paper reported that his ex-girlfriend  Zari Hassan, who was in Uganda when the singer visited, had sabotaged the much-hyped third birthday to their daughter Tiffah.

2. Leftovers – A few weeks to the Kilimanjaro Tanzania Music awards  2015, Diamond is reported to have rubbed a section of his fans the wrong way after reportedly calling another of his exes, Jokate Mwengelo, who was at the time rumored to be in a relationship with his Archrival Ali Kiba, ‘leftovers.”

As the saying goes ‘no friendship is stronger than that of two women with a common enemy.’

Jokate had teamed up with Wema Sepetu who had just broken up with Platinum’s the previous year to campaign for his archrival, Ali Kiba, who he was battling it out with him in the best male act category.

A reporter sought Diamond’s opinion on his ex-girlfriends ganging up against him and the rumors linking Jokate to Kiba, to which he responded:

( There is nothing new in campaigning for Kiba. As for me, I am busy making new music and my fans know that. As for the two ladies they are not news to me. Not in music nor in their personal lives. I know Wema very well and Jokate, even better. Let Ali Kiba continue feeding on  my leftovers in Jokate if he has decided to go down a road I have passed before, let him do it).

3. B*tch – In November 2017, the singer called his lover turned baby mama, a Bitch. This was after Hamisa named her son after his dad, Abdul Naseeb.

Diamond had all through publicly distanced himself from Hamisa’s pregnancy and a frustrated Hamisa named the young boy after Diamond Platnumz’s father Abdul Naseeb and further released intimate photos of herself and the singer. 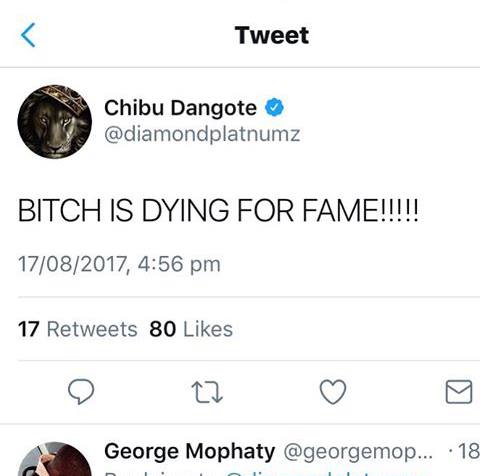 4. Plate -Late last year, Diamond Platnumz released his song Niache which was a song directed to a woman in his life who had trapped him and caused him to fight with his family.

In the song, the singer further questions the mother of the woman the song was directed to.

Hivi ungo wewe ulivunja mwali ama ulivunja sahani? ( Let me ask did the womb give birth to a lady or a plate)  Diamond poses in the song.

In the song, Diamond further wishes he was a vehicle or a bee so as to destroy the said woman.

It is not yet clear to who the song was directed to, however, all fingers pointed to Hamisa Mobetto as he had earlier in an interview with Clouds FM accused the socialite of working day and night to ensure he fought with his then partner, Zari Hassan.