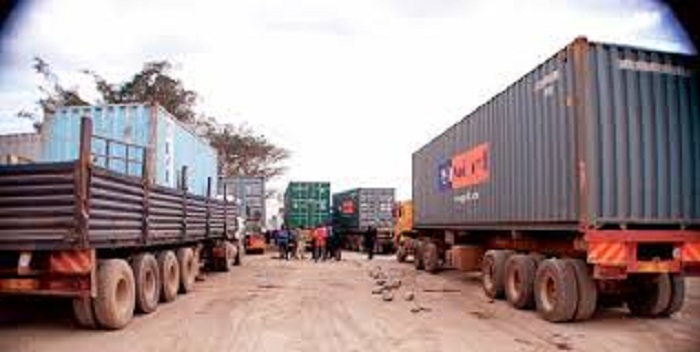 Kenyan drivers ferrying goods to Uganda and countries such as Rwanda, South Sudan, and the eastern part of the Democratic Republic of Congo are forced to attend to a call of nature on buckets whenever they are the Ugandan territory.

This is according to Dennis Aloo, the chairman of the Kenya Transporters association Mombasa branch who decried the escalating discrimination of Kenyan drivers in Ugandan soil.

“Kenyan drivers are facing a lot of stigmatization in Uganda. They cannot stop to attend to a call of nature as locals will chase them away accusing them of ailing from Corona. They are no longer allowed to access public toilets or use toilets in public hotels and most of them are being forced to do it on buckets which they drive around with” Oloo said in an interview with Baraka FM.

READ ALSO: Meet town where Rwandese brides are being sold for sh. 2200

Oloo added that in most towns, the drivers are not being allowed to eat in hotels and access accommodation and are treated as if they are supposed to be quarantined in their vehicles.

Six Kenyan drivers have so far tested positive for COVID-19 in Uganda.

Last week, the Kenyan ambassador to Uganda Kiema Kilonzo wrote a protest letter to the Ugandan foreign affairs ministry warning against the mistreatment of Kenyan drivers in Ugandan soil.

Kiema attributed president Museveni’s remarks in which he warned Ugandan women to stay away from Kenyan truck drivers as having fuelled the ongoing hate attacks.

“Drivers are quickly becoming objects of scorn and suspicion and even being stigmatized. There have been incidents where members of the public have shouted expletives and pejoratives such as “Corona!” “ Corona !” in reference to Kenyan truck drivers. These developments have made the Kenyan truck drivers feel they are adjudged, guilty, unwanted, and dirty” Kiema said.

Countries along the northern corridor heavily rely on the port of Mombasa.

There are at least 600-1000 heavy commercial trucks that haul cargo between Uganda, Rwanda, Burundi, South Sudan, DR Congo, and the Port of Mombasa.