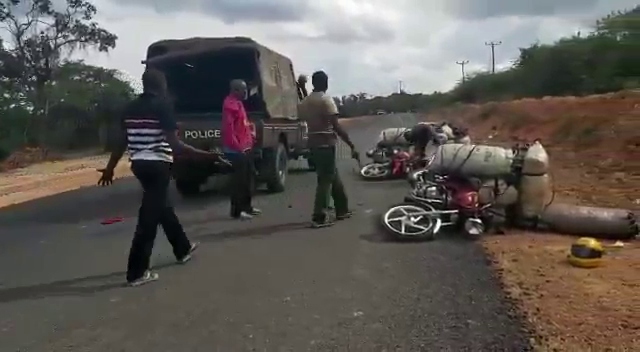 An administration police officer captured on video that went viral for allegedly mishandling charcoal traders in Kilifi has been fired.

Yakub said that officer was dismissed following his bad behavior and will be arraigned in Court on Wednesday.

“We wish to thank the members of public who recorded the video and brought it to our attention”, said Yakub.

The Deputy President William Ruto had also condemned the incident on his social media account and called inspector general of police Hillary Mutyambai to take action against the AP officer.

“The issue of the police officer mishandling locals in Marafa in Kilifi County was brought to my attention by Magarini MP Michael Kingi” read the statement on his social media accounts.

In the video that went viral on Tuesday morning two bodaboda riders are heard confronting the officer who they had already given money to allow transportation of the sacks of charcoal.

Another person in the video in civilian clothes who identified himself as a regular police officer is seen trying to restrain the officer.

The location of the confrontation is in Magarini Marafa within Kilifi County. The scuffle led to the AP officer drawing up his pistol threatening the charcoal traders.

The officer is later seen getting into his police Land Cruiser and speeding away.