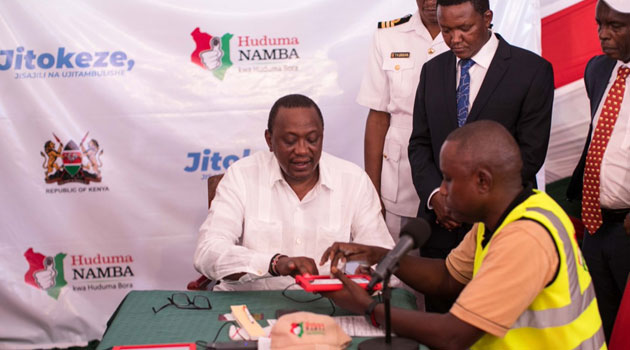 As Kenyans begin enrolling to the recently launched Huduma number, which has generated a national debate, students from  Tanzania who are currently studying in Kenya have welcomed the program saying it will help them become recognized by the Kenyan government.

According to Latifa Bakari, a form 3 student at Mahoo Girls Taveta who is a Citizen of Tanzania, the Huduma number will help them in identify themselves as students at the border.

Bakari explained that authorities at the border give them a hard time as they lack a passport and an identity card.

Latifa applauded Presidents Uhuru Kenyatta for launching the Huduma number saying as students from Tanzania have been denied some services like health services while studying in Kenya and they have to seek medication in private hospitals.

Aziza Alfa another Tanzanian student echoed sentiments of her colleague congratulating Kenyan government for introducing a system of registering its Citizens and foreigners which will give them an opportunity to start receiving services from government institutions.

The Huduma number registration exercise kicked off yesterday after being launched by the president and other leaders across the county.

The area chief Ms. Beatrice Kodi who presided over the exercise in Mahoo area, however, said the exercise was moving on smoothly despite the shortage of registration machines.

” Foreigners especially students from Tanzania have no Identification documents but produce only birth certificates whenever they are required to produce identification hence most of them have been missing out on services like health,” Beatrice Kodi said.

This comes just a few weeks after Tanzania women married to Kenyan men complained that they were being denied access to government services including health.

The Chief said the Huduma number captures both Citizens and non-citizens hence giving an opportunity to Tanzanian women married to Kenyans use their husband’s ID cards to seek any government service.