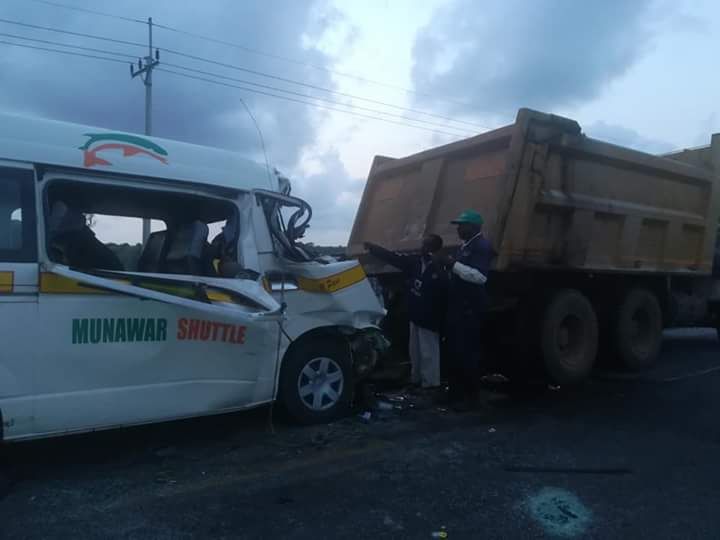 Kilifi, KENYA: The death toll from an accident along the Mombasa -Malindi road has risen to six

This was after two more people succumbed to their injuries while being rushed to the Kilifi County Referral Hospital.

According to the Kilifi county commander, the accident occurred after the vehicle they were traveling in rammed into a stalled lorry.

Eight people who were injured are currently receiving treatment at the Kilifi County Referral hospital for treatment.

“The Matatu was heading to Mombasa and on reaching Shauri Moyo it encountered another vehicle which had mechanical issues and was parked on the road. The driver and other two men, one of them his conductor together and a  woman died on the spot,” said Ochieng’.

The County Commander said the matatu had twelve passengers on board.

Police have now launched a manhunt for the driver of the lorry who is expected to be charged with manslaughter.

“He failed to put the lifesaver alert to alert road users that there was a broken lorry ahead of them because if he had put the lifesavers the driver would have seen them from far” he said.

“We arrived at the scene and found four adults dead. One of them died while undergoing treatment at the emergency.A child who was with his parents was brought to the hospital but on checking on him he was already dead” said Zomo.

He said they have admitted six patients, one child at the High Dependency Unit (HDU) and the rest are adults, who are stable.

However, survivors who narrated their ordeal while on their hospital beds at the County referral hospital blamed the driver for over speeding and thanked God for saving them.

“I was to seat at the front seat with the driver but God spoke to me and told me not to and I went back to the conductor’s seat. Again I moved from the seat and I sat on the back seat. The driver was over speeding and when we reached Shauri Moyo we found the stalled lorry and there was nothing like branches or anything to signal our driver so he panicked and he rammed into the lorry,” said Mwango Shem.