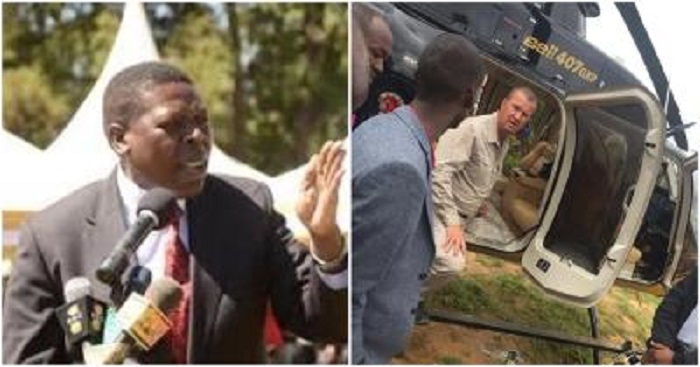 Captain Stephanus Kruger has received a lot of praises following the act of abandoning his official duty to attend to a pregnant woman who had been shot in Marsabit County.

The captain had flown the Devolution CS Eugene Wamalwa together with other officials who were on a flood assessment mission in Northeastern Kenya on Sunday.

It was during this trip, that he learned that a woman had been struck by a stray bullet as rangers pursued hyenas that terrorized Eborr village in the county.

The woman, who according to witnesses is six-month pregnant, was shot as the Rangers were on the operation of finding the hyena that had terrorized the area.

The hyena was later killed.

However, the area was flooded and due to poor network and the residents had a hard time trying to rescue the woman.

According to the area chief Karicha Boru, villagers made a distress call upon seeing the helicopter hovering above their village for help.

The villagers then carried her to the helicopter where Captain Kruger offered to help together with a nursing officer handling flood victims and put her on a drip.

She was airlifted to a waiting ambulance which was 40 km away and taken to a hospital in Moyale where she is recuperating.

Kenyans have taken to social media to praise Captain Kruger for his noble act of helping the lady.

“Well done CS Eugene and Captain Stephanus for that noble action taken, it falls in line with the mission you were on… saving lives.” Posted one Shanel SItu

“He is a hero!” Posted Jesang.