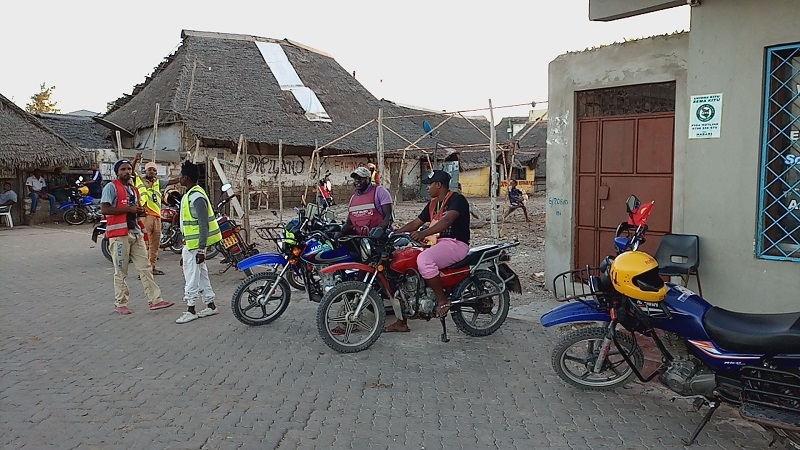 Lamu,KENYA:Transport within the Lamu old town continues to be paralyzed for the second day as boda boda operators down their tools citing frustrations by county askaris.

Lamu currently has over 100 boda boda operators despite the town being a world heritage site having been listed by Unesco in 2001 which requires that all elements of westernization be avoided in order to conserve the culture and heritage of the ancient Swahili town.

Due to the narrowness of the streets, the only mode of transport allowed is donkeys.

The boda boda operators have accused the county askaris of unnecessary arrests and demands for licenses for the business which majority don’t have.

They said the askaris have also been increasingly demanding bribes as payment for any simple mistakes made by the boda operators as they go about their work in the own.

They lamented that the business doesn’t really bring in much money and that the increasing demands for bribes by the county askaris were leaving them high and dry without any realistic saving at the end of a day’s work.

Transport for many who had already become accustomed to using the boda boda services for movement in the town has become a nightmare.

Cart pushers and donkey owners are however making a kill from the current situation as they take over to cater to the needs of many who want to have their goods moved around.

Speaking in Lamu on Wednesday,the operators have criticized the county government administration of for their continued silence while they continue to suffer at the hands of the askaris.

Through their chairperson of the Lamu Boda Boda Operators Association chair Mohamed Badi,more than 10 motorcycles whose owners refused to bribe the enforcement officers have been confiscated and are being held at a police station in the town.

Badi called on Lamu governor Fahim Twaha to personally intervene and look into the matter.

“County askaris here aren’t giving us breathing space.They will arrest you for any tiny reason.Theny they will demand that you bribe them and if you refuse they take your bike.This has gone on for long enough and its frustrating,”said Badi.

He said many had already lost their jobs since many motorcycle owners had already taken back their bikes since the strike began.

Badi however warned that jeopardizing the boda boda business in the town will result in increased crime rates as the venture had employed many former criminals who might get tempted to get back to their former lifestyles if they lose their current means of livelihood.

“People here have families and that means they are depended upon.How do you think such people will survive if they lose this venture if not joining crime.This business has even employed former drug users and we fear they may go back.We need a solution on this issue,”said Badi.

They have appealed to the county government of Lamu to give them ample time for them to be able to process licences instead of ambushing them demanding the same.

They also appealed to leade4rs in the region to consider sponsoring driving lessons for boda bodas in the county majority of whom are poor and cannot afford it.

This is the fourth month since the boda boda business kicked off in Lamu town.

Previously,the county government had banned automobiles from the town in a bid to conserve its culture and heritage