Word doing rounds in Tanzania is that Tanzanian video vixen and Diamond Platnumz’s baby mama Hamisa Mobeto is unwell and suffering from the effects of what seems to be witchcraft.

According to reports from Tanzania, Hamisa is unwell and seems to be confused .

The reports further indicate that Hamisa’s family took her to a religious leader for further intervention where she is currently.

Hamisa’s family has not publicly commented on the matter however a few days ago, Hamisa’s mother urged her followers to pray for Hamisa on Instagram posting a quote of the Quran.

“Good and Evil deeds are not equal, Repel evil with what is better; then you will see that one who was once your enemy has become your dearest friend (Qur’an 41:34) pray for my adorable daughter Hamisa.” Mama Mobeto wrote on Instagram. 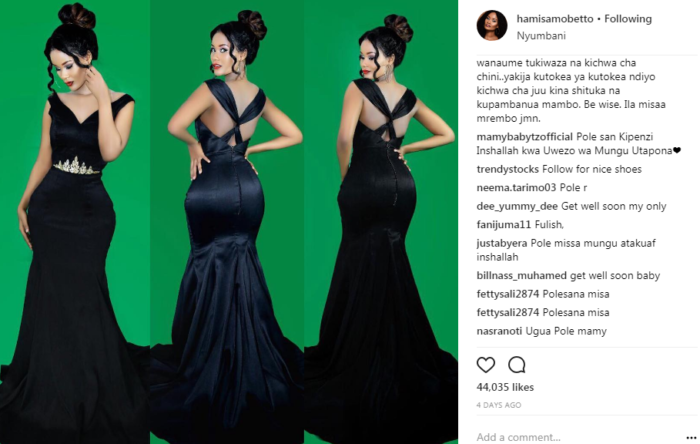 Hamisa has neither been active on her social media pages as her last post was 4 days ago and several of her fans have sent get well soon messages to the mother of two.

This come a few days after a law firm linked to Danube furniture which her arch-rival Zari Hassan is a brand ambassador wrote a letter to Hamisa urging her to pull down a video she had earlier shared of Diamond and Zari fighting that was meant for advertisement purposes which Hamisa is yet to pull down.