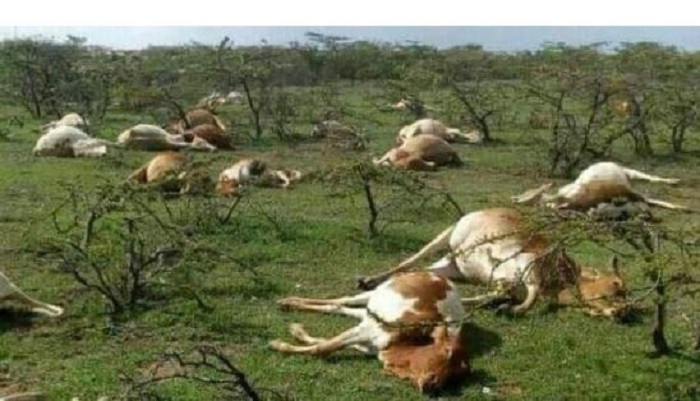 The Maa community which comprises of Maasai, Samburu, Ilchamus, Larusa and Ilmolo are pastoralist that entirely depends on livestock for their livelihood.

Addressing journalist on Tuesday in Nairobi, Maa advocate Naikuni Ngaah, alluded that the shooting of their cattle by the police was an open display of impunity for the livelihoods and survival of long marginalized communities.

“We want to emphasize that cattle means a lot to the Maa community in particular and pastoralists in general. That one emaciated cow, goat or sheep that means nothing to non-pastoralists communities in Kenya, is equivalent to a kiosk, coffee and crops that other communities value as a source of survival. Shooting dead those animals amounts to economic sabotage of the pastoral communities.” Said Ngaah.

The community also demands that the government compensates the cattle owners at prevailing market rates for their livestock that were killed by police three days ago.

They also want that the government to release pastoralists who are in police custody and haven’t been charged with any offense for over two months now.

They further urged the government to provide the pastoralist with permanent means of sustaining their livestock during drought, including controlled access to the ranches that may have water and pastures during moments of drought.

“The reason the pastoralist suffer is that their land which is meant to be community land has been already taken by the so-called private ranchers. They have no place to graze their herds of cattle. This is a historical injustice which has not been addressed.” Said Maa Advocate.

Police have been accused of killing over 300 livestock belonging to pastoralist communities who have invaded private ranches in Laikipia County.

The incident has been condemned by pastoralist communities, with their leaders turning to social media to accuse the police of employing unlawful means to evict them from the ranches.

Meanwhile, police have dismissed accusations of wanton killing of livestock belonging to the pastoralist communities in Laikipia County.

In a statement, Police Spokesman George Kinoti stated that the animals were caught in crossfire as officers were engaging illegal herders who had invaded private ranches.

Kinoti said that the armed herders chose to use their cows as a shield while firing at the police.