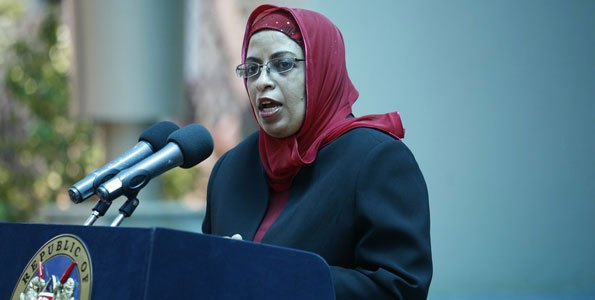 Lamu, KENYA: Lamu residents want the late Public Works PS Mariam El Maawy’s position given to a Lamu resident as a way to honor the PS and keep her spirit alive.

El Maawy succumbed on Wednesday to injuries sustained from an al shabaab attack at Milihoi area in Lamu on July 13 this year.

She died at a south African hospital where they had sought treatment shortly after the attack that left her nursing gunshot wounds to the chest and burns on the legs.

Speaking in Lamu on Friday,residents termed El Maawy as a selfless woman who served the county and nation relentlessly.

Residents said for over 50 years,Lamu county has been marginalized especially in matters leadership in the national government and that El Maawy’s appointment as PS had ushered in a new dawn for the region.

They said El Maawy was the only woman appointee in the national government from Lamu, who had sealed the marginalization gap that the region has for decades witnessed and said it would only be proper that her replacement be appointed from Lamu in her honor.

“We have been so proud of El Maawy,she had been our light up there.Whenever she was around and even far,we knew we had someone to run to,and now she is no more.Alll we ask is that the president considers appointing her replacement from here so that they continue with what El Maawy had been doing.It will be a way of also honoring her and keeping her spirit alive,” said Mohamed Abubakar,the Save Lamu chair.

Abubakar said it was only fair for the late PSs replacement to come from Lamu considering she was the only representative of Lamu county in such a position.

“Other communities out there boast of having five or even ten people up there.For us,we only had Mariam and now that she is gone,we ask that someone from here replaces her.We know she can never be replaced because her contribution was immense but all we want is someone to keep us remembering her,” he said.

Lamu leaders,governor Fahim Twaha and former women rep Shakilla Abdalla eulogized El Maawy as a hardworking and dedicated woman who was also a role model for the young girls in the county.