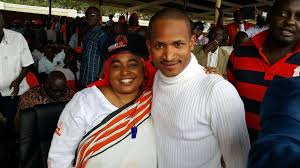 Nairobi,KENYA:Member of Parliament for Embakasi East Paul Ongili( Babu Owino) has been arrested by the police and taken to office of Director of Criminal Investigation headquarters for further questioning.

Nairobi county commissioner Japhet Koome on Monday  confirmed the arrest of the young Member of Parliament that was elected on an Orange Democratic Movement (ODM) ticket.

This comes after the MP was on Sunday reported to have uttered words that are deemed demeaning to the head of state.

The remarks are believed to have been directed at president Uhuru Kenyatta.

Earlier babu had taken to his facebook account were he stated that he will not dare apologize to anyone for the remarks he made.

“I will not apologize to anyone because I called nobody’s name during my yesterday’s (Sunday) address.” Wrote Babu

Jubilee supporters in Githurai, Kiambu also took to the streets calling for the arrest of Babu Owino for disrespecting President Uhuru.