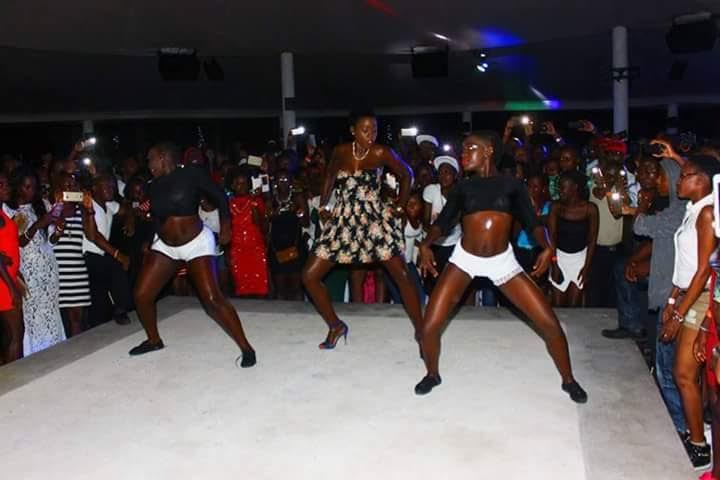 Over the weekend Akothee made a Grand entry at the Pata Pata Beach hotel in Malindi to a receptive crowd who couldn’t help but wait to see her perform.

With the caravan of her Akothee Safaris Vans and her in a Landcruiser V8, she made a grand entry just like her name “Madam Boss”.

The event that was  partly sponsored by Baraka FM, began at around 9pm Saturday night and saw Malindi locals together with their Italian counterparts grace the beach hotel, all in their best night out attires.

Unlike her previous Pre Valentine show in Mtwapa at Lafolia,this was full of energetic fans who were charged even before she took to the stage.

The DJ was on point with the best Music selection in town with  Baraka FM’s Emcee Rawney topping it up, as he welcomed Akothee to the Stage.

When Akothee took to the stage, the crowd went mad with some of the fans getting onto the stage just to have a glimpse of or even touch Madamboss aka Akothee .

The Bouncers who were overprotective as usual, could not allow fans to get close to her, until Akothee told them to let her fans enjoy themselves since ‘they are the ones that make her’.

All in all, the bouncers were overpowered by the fans who took to the stage and started dancing and twerking together with Akothee (like the Mzungu Man you will see on the next page).

One of the fans got an opportunity to dance with Akothee (to be the Diamond )when she performed ‘Sweet Love’ where he held Akothee so suggestively.

see the video below:

She energetically performed most of her hit songs like; Give it to me ,Yuko moyoni, Sweet love and finally Benefactor which has been ruling the airwaves leaving the fans asking  for more.

SEE VIDEO OF MZUNGU AND OTHER PHOTOS ON THE NEXT PAGE